Background: Till recently the government is planning for national level availability of doctors. However, to improve health care service delivery, robust regional planning for production and supply of health professionals is need of hour. The study aims to understand the demand and supply of trained doctors and tertiary care facilities in different regions of Rajasthan.

Materials and Methods: Data of undergraduate medical entrance were used to adjust against the voluntary attrition rate, superannuation rate, natural death rate and external additions to define the pool of available practicing doctors. The estimates were generated by forecasting the population and expected supply of doctors till the year 2035 by projecting the data by Average Exponential Growth Rate (AEGR).

Results: The study suggests that in 2018 the density of doctors was 0.32 per thousand population in Rajasthan than that of 0.7 in India. At the current AEGR of 5.53 %, density of doctors will only improve to 0.73 in year 2035. There are 16 districts with 41.1 % of the population of Rajasthan have no medical school or any tertiary health care institution. Similarly, undergraduate enrollment varies in different regions from 1.5 to 13.5 students per 100000 population.

Conclusion: The challenge of availability of qualified doctors in Rajasthan will persist even in year 2035. There is an urgent need to ensure regionally balanced production and supply of skilled doctors.

India is one of the fastest growing economies and the second most populous country in the world. Despite encouraging development in other sectors, health care parameters still lag behind the set goals. Unavailability of qualified medical practitioners is challenge to provide Universal Health Coverage and reduce the Out-of-Pocket expenditure of beneficiaries. India faces not only the huge shortage of health professionals but also maldistribution within its health workforce.1 The authors,2 establishes a positive correlation between human health resources and better health outcomes, including decreasing death rates and prolonged life.

This study aims to explore the inequality in the distribution of health workforce with evidence from official data to assess the production, availability and distributional pattern of skilled physicians across the different regions of the Rajasthan state.5

(No ethics committee approval was required for this research.)

This study uses the undergraduate student enrollment in medical school for the five-year medical education programme as input for skilled physicians. Once these medical students pass undergraduate degree (MBBS) they are required to register with Rajasthan Medical Council (RMC, a regional arm of Medical Council of India). Official data was collected from RMC since 1970 of yearly registration of physicians. However, the RMC does not maintain any live register to suggest the position of actively enrolled practitioners at any point in time. Furthermore, there is no valid information about those doctors who left the practice voluntarily or involuntarily.

One doctor per 1000 population is the minimum recommended standard against the WHO recommended minimum benchmark of 2.28 Skilled Health Professionals, which include 1 doctor and 1.28 nursing staff per 1000 population. However, for better delivery of health services, WHO Report 1993 recommends nurse-physician ratio 2 to 4.7 The Medical Council of India (MCI) Vision 2015 adopted WHO norms of 1:1000 doctor population and aspired to achieve this target by the year 2031 for all India.8, 9

The trends for the number of doctors over time is measured using AEGR, which is the most suitable for growth rate in population and labour force increase.10 In this Wn and W1 are latest and first observation in enrollment of undergraduate medical students.

The supply of physicians is calculated by using inflow of enrolling undergraduate students by adjusting for attrition rate,11 Natural death rate, Graduation ratio12 and Immigration inflow of doctors who completed their degree outside of India.(Table 1) The immigration ratio is calculated by the using number of students passing Foreign Medical Graduate Examination conducted by National Board of Examination India for the year 2012-14 (9690 students) the immigration rate calculated to be 6.58% of total national enrollment in that period.

Generally, doctor joins the health labour market at the age of 30 years and retire at the age of 68 years (assumed same as the Life expectancy in years in Rajasthan). The professional active life of doctors is considered coterminous with the life expectancy. The attrition rate is calculated by voluntary exits (i.e. switching to other jobs) and illness and premature retirement. Involuntary attrition includes retirement due to age over 68 years. The involuntary attrition rate is calculated by expected future retirements based on medical school enrollment in corresponding period 38 years ago. This superannuation rate will be 1.61 % for the next 17 years in Rajasthan.

Different rates for health workforce: there is no conclusive study from India 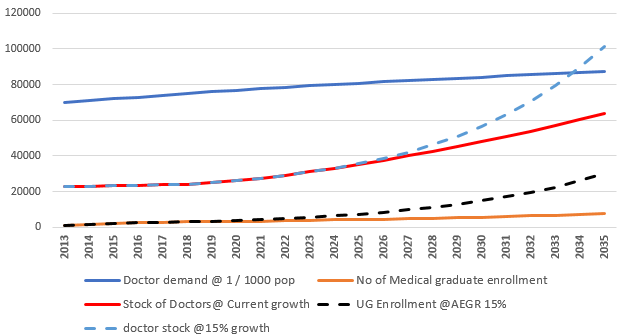 Rajasthan: Under graduate enrollment per 100000 population

The modelling estimates indicate a very high deficit of physicians’ availability in Rajasthan than previously thought. These estimates serve an illustrative purpose and also used to inform policy-makers about the magnitude of future challenges and to redesign the traditional models of education, deployment, and management of the health workforce.14 Figure 1 shows not only the historical gap in the supply of trained doctors but also estimates future shortfall of basic doctors. In the year 2018, against the requirement of 74884 basic doctors, only 24228 doctors were available making a deficit of 2/3 of total required strength of doctors. It is alarming to know that even if Rajasthan continues to supply doctors at the current AEGR rate of 5.53%, it will not be in a position to achieve the target of 1 physician for 1000 population in the year 2035. There is a gap of 23215 physicians in the year 2035 against the demand of 87057 which amounts to shortage of 36.7%. A hypothetical scenario is created by assuming the augmented supply of doctors at the AEGR of 15% which is almost three times of current exponential growth rate. At this unrealistic augmented supply, we could achieve the target of 1 doctor per 1000 population in the year 2034 only.

In the year 2016 the doctor density was 0.33 in Rajasthan against than that of 3.4 in OECD countries, 1.8 in China and 2.6 in the USA.14 To meet the aspirations of MDGs (Millennium Development Goals) and provide commensurate health care to rising economic status and aspiration of new India, we need to provide more than 1 doctor per 1000 population. To understand this extra demand of health professionals, this model was extrapolated to calculate supply at the demand of 1.5 doctors per 1000 population. In 2019 against the availability of 25056 doctors we have a deficit of 88686 doctors.

It is estimated that there will be an increasing growth in demand for health workers in middle income countries, driven by economic and population growth and ageing.14 The middle-income countries such as India will face workforce shortage because demand exceeds supply. This disproportionate gap is estimated to be more pronounced in Rajasthan than that for India. However, there has been an increase in number of medical schools and under graduate medical students’ enrollment since 1991. (Figure 2). In 1991, there were only 10 medical schools, which included 3 private schools. In the year 2019, there are 14 government and 8 private medical schools. The percentage increase over last three decades in number of medical schools is 167% and enrollment increase is 188% in private sector, while corresponding increase in number of schools and enrollment was 100% and 173% respectively for government medical schools. It is found that the private sector in medical education provisioning outperformed the government institutions.

Several research studies have been conducted by many authorities and authors to estimate doctors and doctor’s density in India.1, 2, 3, 4, 5, 6, 7, 8, 9, 10, 11, 12, 13, 15, 14, 16, 17 Although there is one article18 that states that India has attained it’s WHO recommended doctor patient ratio, however it takes into account the number of doctors both from modern and traditional system of medicine. The findings from different sources are varying. This study is unique in the fact that there is hardly any attempt to provide doctor supply information for states and sub regional distribution in India. Particularly for Rajasthan, any specific study or paper could not be found for assessment of physicians’ stock and prediction for future requirements and possible supply of skilled physicians.

Rajasthan is the largest geographical state of India. The major clustering of trained doctors is in the major cities of the Rajasthan. By having more medical colleges and associated hospitals in all districts including tribal and backward area, will ensure equitable distribution of not only of health care professionals but also of health care facilities in whole state. Further the increased supply of doctors will push more doctors to smaller cities and towns if not villages. As an example, the Jhalawar district, which is 400 kms away from Jaipur. Where before establishing a medical school in year 2010, available doctors at district hospital were not even 20, but now this number is more than 15 times of that number. Which includes teaching faculty and resident doctors.

An analysis of medical schools and associated tertiary care facilities is done on distance factor which is an important determinant of accessibility and universal coverage of health care services.

The 14 districts out of 31 districts of Rajasthan are located at least 100 kms away from the nearest tertiary care hospital and medical school (Table 3). These districts cater to 36.98% population of the Rajasthan state. This translates into at least two hours of road journey to reach the well-equipped hospital to avail better health care facilities. The three districts namely Ganganagar, Hanumangarh and Jaisalmer are more than 200 kms away from tertiary care facilities. This long commute time of 3-4 hours by road, puts this marginalized population residing in these areas under severe disadvantage of poor access to quality health care.

Not only the availability of competent health professionals but also the equitable distribution and accessibility to local people can strengthen the health systems. This in turn translates into an effective health service coverage.15 Similarly, High level commission on health employment and economic growth19 has recommended for health workforce growth so that delivery of quality universal health coverage and access can be ensured.

The study intends to draw attention of policy makers towards identifying the discrepancy in production, supply, demand and distribution of trained doctors at regional level in the state of Rajasthan. Although several factors drive the health outcomes, having fewer trained doctors severely cripples the ability of health systems to effectively deliver preventive and curative health services.20, 21

Since the effective coverage of health services can be ensured not only by availability of doctors but also by equitable distribution of professional health workers and health care institutions. Besides improving production of physicians, there is urgent need to use alternatives ways such as skill mix, task shifting, redesigning service delivery platforms to address this huge projected deficit of physicians. The policy needs to factor in the new age Internet based service delivery methods such as teleservices, health data repository services and online monitoring services. Such innovative methods can help government to reach more people even at the last mile with existing resources, thereby improving footprint of health system.

Model does not consider the of role Ayurvedic, Unani and naturopathy health professional in health care delivery. This model does not include the nursing staff as this is beyond the purpose of the study. Furthermore, the optimization of resources, productivity and innovations in delivery are assumed to be constant over time.

© This is an open access article distributed under the terms of the Creative Commons Attribution-NonCommercial-ShareAlike 4.0 International License which permits unrestricted use, distribution, and reproduction in any medium, provided the original author and source are credited.

Get article permission for commercial use